Not sure if you’re familiar with it or not, but in an attempt to be even closer to the public, the President of Russia, Dmitry Medvedev, has recently transformed his previously more official Twitter account into a more personal one [English version here]. The style of writing there is now a bit more casual and informal than that in the official Kremlin accounts. Among the Twitter accounts he currently follows you’ll see very few, but among them: the President of the United States Barack Obama, The White House, Prime Minister of Canada Stephen Harper, famous actor and 38th Governor of California Arnold Schwarzenegger.

It is amazing to see how many new people from Russia’s federal and local government joined Twitter since I have last checked on it. In 2010 we’ve seen the Governors Nikita Belyh (Kirov Region), Anatoly Artamonov (Kaluga Region), Mikhail Menn (Ivanovo Region), N.V. Denin (Bryansk Region), and multiple other Russian governmental officials open Twitter accounts of their own.

But Twitter can be a risky place, especially for government officials. On October 14, 2010 the Governor of Tver Region Dmitry Zelenin tweeted a picture of an earthworm found in his Kremlin salad.

The British Daily Mail wrote about it:

Dmitry Zelenin, the governor of the Tver region northwest of adjacent Moscow, wrote in his Twitter microblog that ‘a salad with live earthworms’ was served with beef at a dinner to honour German President Christian Wulff’s visit on Tuesday.

On his post, he attached a picture of the salad, which clearly showed an earthworm crawling on the side of the plate. 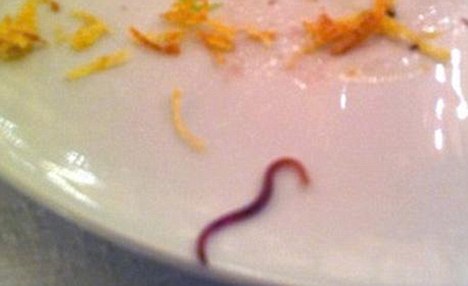 …Dmitry Zelenin took this picture of an earthworm on his plate at a Kremlin dinner and added it to his Twitter account with the words ‘a salad with live earthworms.

Today is Zelenin’s birthday, and Dmitry Medvedev tweeted Zelenin a message wishing him a happy birthday, good celebrations and to stay/quench his hunger (or “заморить червячка” which literally translates as “kill the worm”).

The earthworm has immediately reacted tweeting thanks to the President and pointing out how flattered he is, because “to a degree” it is his “holiday too”, asking Medvedev to retweet.

The latter did just that [see the above image], while the worm tweeted to Zelenin “Happy birthday, Daddy!”

No further comment seems to be necessary; and it is interesting to see how Twitter is becoming an integral tool not only for marketers, but for politicians (worldwide) as well.